Stocks hit a wall late last week as the technology companies, which had led the market higher, slipped in Thursday and Friday trading, dragging down the overall market.

The week began on an upbeat note as August momentum continued into the start of September. While participation in the rally on Tuesday and Wednesday was fairly broad, technology stocks continued to be the focus of market strength. But that sentiment changed quickly on Thursday.

With little warning and no obvious catalyst, it remains unclear whether the technology selloff last week was the result of market technicals or a fundamental change in investor outlook. The coming weeks may provide some clarity in this regard.

The Automated Data Processing (ADP) employment survey showed that private payrolls increased by 428,000 in August, falling short of consensus expectations of over 1.1 million. News turned more positive as new jobless claims checked in at 881,000—an improvement from the over one million new claims the prior week. Americans receiving unemployment declined by 1.24 million to 13.3 million—half the peak number in May.[iv],[v],[vi]

Finally, the monthly jobs report indicated that nearly 1.4 million nonfarm jobs were added last month, with the unemployment rate declining to 8.4%. The progress was predominantly attributable to government hiring, primarily of new Census workers, though the retail, leisure, and hospitality sectors saw gains in new hiring.[vii] 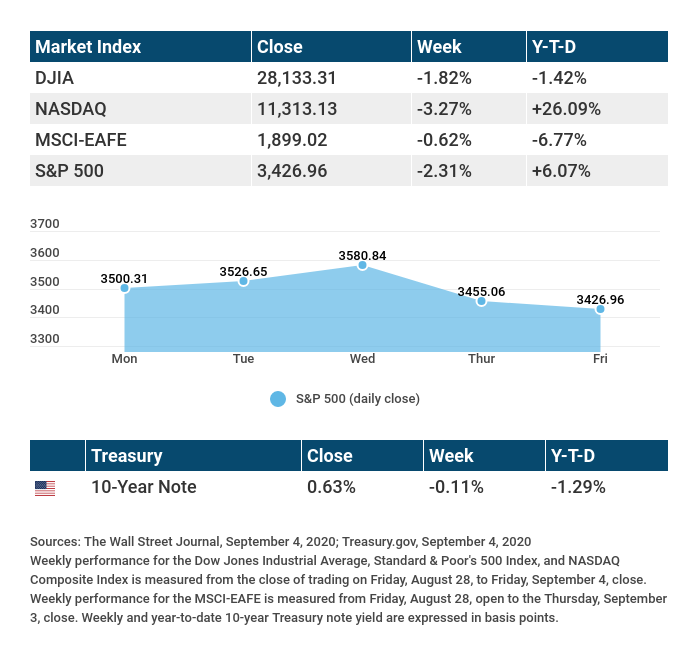